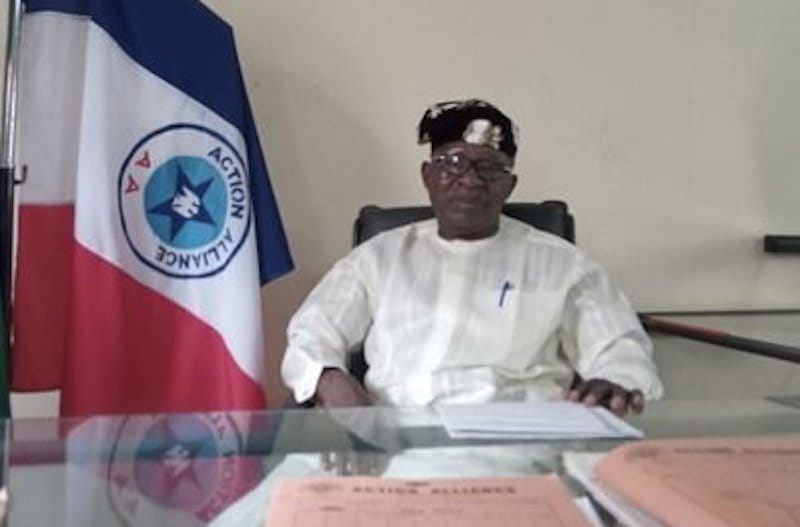 The Action Alliance  Party has refuted allegations that the party filed a suit in the Federal High Court, Abuja against the All Progressive Congress (APC) and its Presidential candidate, Asiwaju Bola Tinubu.

The  National  Chairman of the Party, Hon. Adekunle Rufai Omo-Aje, made this known in a statement made available to the media in Kaduna.

The  Statement said that the matter with case no. FHC/ABJ/CS/954/2022 filed and deposed to by one Upkai Ukairo and one Kalu Agu has nothing to do with Action Alliance.

The  statement stressed that as a matter of fact, both Upkai Ukairo and Kalu Agu are alien to the party and its leadership, most probably are effigies or at best imaginary personalities.

The  statement explained that, Hon. Adekunle Rufai Omo-Aje is and remains the National Chairman of Action Alliance in Nigeria and neither he nor the  leadership  of the Party are   privy to  the court case.

“Action Alliance as a party is one and has no faction at all whatsoever, any other person parading himself/herself as national chairman is an usurper.

“We advise the said respondents in the purported suit, to disregard and discountenance the entire matter in its entirety as it was the handiwork of political jobbers sniffing around in search of any vulnerable mind around to sleaze.

“Action Alliance is busy working to fulfil all legal documentation required by law to participate in the approaching Osun state Gubernatorial election and the 2023 general elections.

“The party shall soon take necessary measures to put a stop to the unholy exploit of the faceless usurpers behind the said criminal act.” the  statement