As a show of support and encouragement to the newly coronated Emir of Kano, Aminu Ado Bayero, President Muhammadu Buhari, who was represented by the Vice President, Prof Yemi Osibanjo, thanked governor Abdullahi Ganduje of Kano state, as he described the appointment and coronation of the Emir as generational change.

He made the statement during the Coronation of Emir Bayero held at Sani Abacha Indoor Stadium, Saturday, “Your Excellency Abdullahi Umar Ganduje I congratulate you on this period of joy as you midwifed a generational change of guards…with the swearing-in and handing over of the Staff of Office to the new Emir of Kano, Alhaji Aminu Ado Bayero.”

He said “It is for me a special privilege to be in this city of proud history of exquisite culture to represent the President of the Federal Republic of Nigeria, President Muhammadu Buhari to witness this historic Coronation of Alhaji Aminu Ado Bayero, as the 15th Fulani Emir of Kano.”

“Your Royal Highness I need not to say to you that this city of Kano is not ordinary city in both historical and modern times. Kano has always been revered as a major commercial and economic centre in Africa.

And a melting pot of diverse tribes and cultures, assimilated into a robust, vibrant and cohesive whole,” he observed.

He continued appreciating that, “It is only with the tolerance of the culture of Kano where opposite ideas can co-exist peacefully. That you could have a thriving free market economy, with several Millionaires and yet also be the best of the radical centre left of political ideas.”

Adding that, “This is afterall the city of the socialist man of the masses, Malam Aminu Kano and many of his disciples. And Kano is also the home of the capitalist richest man in Africa, Alhaji Aliko Dangote. From wherever you come to Kano, you must feel at home.”

In a letter from President Buhari to the Emir, that was read by the Chief of Staff to the President, Professor Ibrahim Gambari, who also coincidentally happens to be an uncle to the Emir, the President said “I wish to extend my whole hearted congratulation to you for your ascension to the throne of your forefathers, as the 15th Fulani Emir of Kano,  from the Sullubawa clan, culminating in a well deserved installation that has just taken place here on this Saturday, 3rd of July, 2021.”

The letter states “Your coronation and turbanning is providential, because it is happening at a time in the history of our country when the prevailing social and political conditions resonate from the ascension of my friend, your late father, the Emir of Kano, Alhaji Ado Bayero. May his soul rest in perfect peace.”

“As I continue to pray for your success and look forward to your contribution to uplifting the people of Kano Emirate in particular, and the nation in general. I wish to assure you of my support for you to leave a sustainable legacy,” the letter concludes.

To express his gratitude governor Ganduje said “All the traditional leaders who have gathered here, particularly the Sultan of Sokoto, have done us a great honour, with their presence. The last time we witnessed a historic event like this, was when the late Emir of Kano, Alhaji Ado Bayero, was handed over the Oath of Office here.”

“It is without any doubt that, all these celebrations up to this grand occasion are well received by the people of Kano. That is why wherever you go in Kano today people are celebrating because of this coronation. Which shows how people accepted this historic event.

It is accepted by our religious leaders, by our youth and women, by business community and by all segments of society, including his blood relations within the Emirates,” he said.

Governor Ganduje said “Your Highness we are very happy with the way you are conducting yourself and the way you operate in this exalted Emirate. We are witnessing how you are helping government on many developmental spaces. We are happy with that. We pray that may Allah guide and guard you on this throne.”

Appreciating further that, there was no doubt that the late Emir Ado Bayero who ruled for over 50 years, had promoted peace and stability in the state.

Then from 1998 he worked with civilian governors. And there was no point in time when there was clash between the Emirate and the state.”

Explaining further that it was a very welcome development that the new Emir fits into the shoes of his late father, “…since his ascension to the throne he moved to continue with the good relationship that his father left between Kano Emirate and other Emirates across the nation.

He respected them very well in their palaces. That is why they said they would reciprocate back. This is why we are seeing them all here.”

Over 100 Emirs/traditional leaders from across the nation and other nations of the world graced the occasion. Many came from each of the six geo-political zones of the country.

Not less than 8 governors from parts of the country were physically at the occasion, these are governors of Jigawa, Katsina, Zamfara, Kebbi, Sokoto, Bauchi, Kogi, and Lagos were there.

Many traditional leaders from Senegal, Tchad Republic, Cameroon, Niger Republic, and Ambassadors from South Africa, India among many other foreign diplomats were present at the grand event.

Ministers of the Federal Republic of Nigeria were there. Along heads of federal government agencies, departments and parastatals. 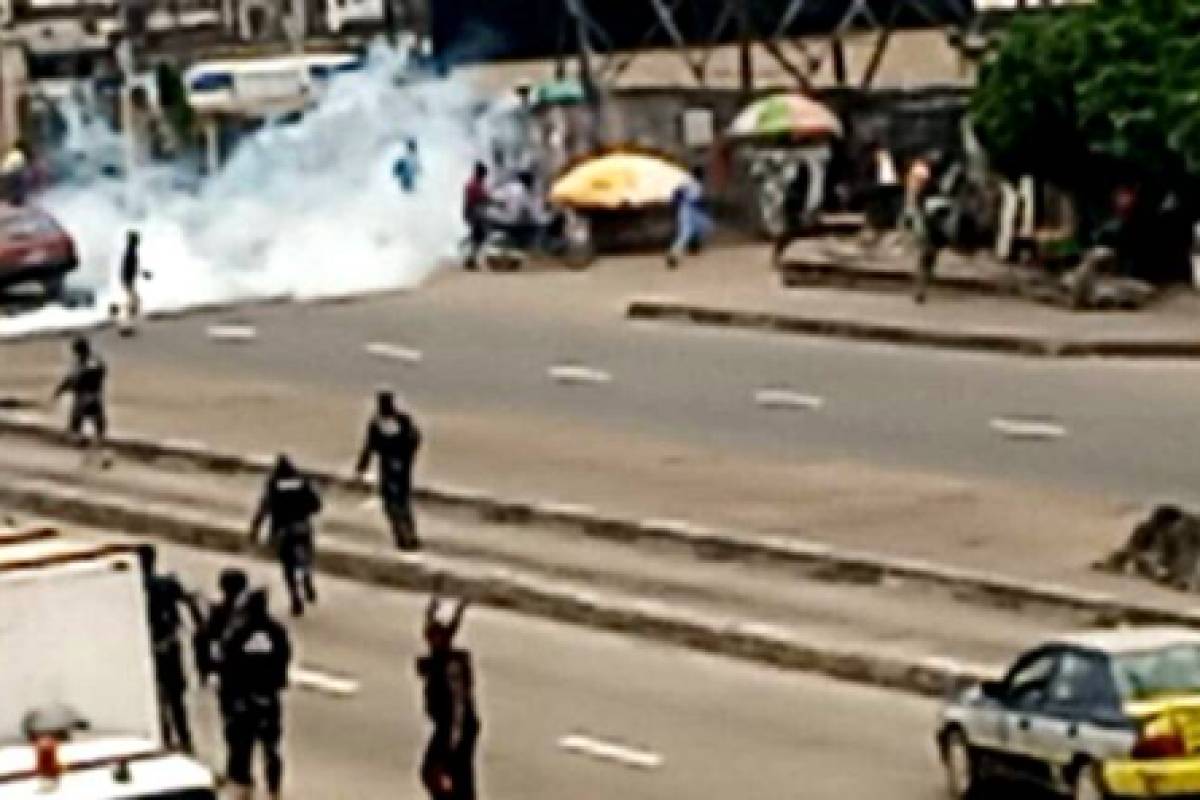 The Oodua Republic Mega rally held at Ojota area of Lagos on Saturday, was marred by the death of a 14-year-old girl alleged to have been hit by a stray bullet fired by the Police in a bid to disperse the protesters.

But in a swift reaction, the Lagos State Police command exonerated its personnel of culpability, stating categorically that no bullet was fired at the rally.

The lifeless body of the 14-year-old girl was reportedly discovered in front of her mother’s shop, about 15 to 20 meters from where the Police team was with her stomach and wrist reportedly perforated by a bullet.

It was gathered that the Commissioner of Police, Lagos State Police Command, CP Hakeem Odumosu, visited areas mapped out for the rally, by the organisers to ensure adherence to his earlier warning that the command would not entertain any rally in Lagos.

On arriving Ojota, he was said to have addressed some journalists who were on ground to monitor the situation. At that point, some protesters who posed as journalists gathered to hear the CP.

Immediately he left the scene, the protesters mobilised and started singing praises of Sunday Igboho and Yoruba slogans in solidarity of the Yoruba race.

At that point, a team of policemen stationed at Ojota, fired water cannon first, to disperse the protesters. But when that didn’t achieve its purpose, they fired tear gas canisters, which forced the protesters and journalists to take to their heels.

However, some protesters said the policemen also fired gunshots into the air, apparently to disperse the protesters.

But the Lagos State Police Command maintained that no live bullet was fired at Ojota. It described the alleged killing of the teenager by police stray bullet as rumour.

The command in a statement signed by its image maker, CSP Muyiwa Adejobi, said, ” the attention of the Lagos State Police Command has been drawn to news making rounds that a 14- year-old girl was hit and killed by police bullet today July, 3,/2021 at the venue of the Oodua Republic Mega Rally in Ojota,  Lagos.

“The Command hereby wishes to debunk the rumour and state categorically that it’s a calculated attempt to create confusion and fears in the minds of the good people of Lagos State and the country at large.

“The Command did not fire a single live bullet at Ojota rally. The said corpse was found wrapped and abandoned at a distance, far from Ojota venue of the rally, behind MRS Filling Station, inward Maryland, on the other side of the venue, with dried blood stains suggesting that the corpse is not fresh.

“After a close look at the corpse, a wound suspectedly sustained from a sharp object was seen on it.

“The news is false and mischievous. The Command, therefore, urges the general public to disregard the news and go about their lawful normal daily activities while investigation to unravel the incident will commence immediately.

“The Commissioner of Police, Lagos State, CP Hakeem Odumosu, therefore commiserates with the family of the found deceased and assures that thorough investigation will be carried out.

“The Command equally wishes to warn against the spread or peddling of fake and unconfirmed stories as such could be dangerous and counterproductive”.