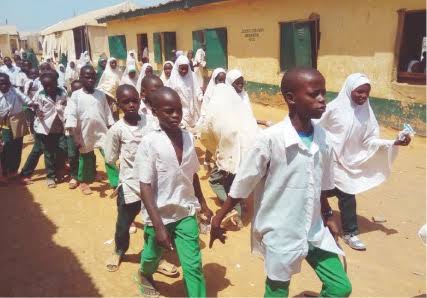 Kaduna state Governor’s wife, Hajiya Ummi Ahmad El-rufai has called on public and private partnership towards the promotion of quality education in the state.

She said Kaduna state government is on a quest to continue to partner individuals and groups with a view to guaranteeing human capacity development through massive investment in children education.

The wife of the Kaduna state Governor who took time to interact with pupils of the public primary school also expressed delight over massive investment been carried out by a philanthropist, ALH ADAMU Attah for the benefit of children of the poor.

Speaking earlier, the donor of the public primary school at maraban-jos and owner of the fifth chukker, ALH ADAMU Attah said he embarked on the project with a view to giving back to the society in line with his organization corporate social responsibility.

ALH ADAMU Attah explained that in the last ten years, maraban – JOS with a density population had no structures to accommodate pupils of nursery and primary school a situation that motivated him to partner UNICEF and other corporate organization and individuals towards the construction of one hundred and twenty blocks of class rooms in the area.

According to him,at present sixty blocks of class rooms have been constructed which is accommodating twelve thousand pupils of nursery and primary levels.

ALH ADAMU Attah further expressed his determination to continue to partner the Kaduna state government towards uplifting the standard of education, especially among children of the poor and the less privileged.
In a remarks, the village Head of maraban-jos, ALH Ibrahim Sidi described ADAMU Attah as a true Nigerian whose love for societal development must be encouraged and emulated by other wealthy individuals.

According to the village head,the children of the poor in maraban-jos can now read,write and speak English through the invaluable contributions of ALH ADAMU Attah.

By Uangbaoje Alex, Kaduna Civil Society Organizations working to eliminate the growing menace of Sexual and Gender Based Violence (SGBV), in Kaduna, on Wednesday officially...

By Uangbaoje Alex, Kaduna As part of activities to commemorate the 2022 16 Days of Activism Against Gender-Based Violence, Women’s Rights Advancement and Protection Alternative...

Northern Group hits back at PDP over comments on Zamfara security

The implementation of New Incentives — All Babies Are Equal (NI-ABAE), program will continue to align with the Federal and State laws, as well as...