The government noted that the arrest warrant of NLC President Ayuba Wabba issued in 2017 over alleged vandalism of government facilities still hold water.

Recall that the organised labour had issued a five days notice of warning strike beginning from Sunday.

In the notice circulated on May 11, the union noted that NLC President Ayuba Wabba would be in the state to monitor compliance with the strike action.

The government, through the state Head of Service, Bariatu Muhammad, and the commissionerr, Local Government and Chieftancy Affairs, Jafar Sani, however, gave the warning at a press conference on Saturday in Kaduna.

He said, “As is appropriate, the security agencies have been notified of the plans of some trade unionists to recruit hoodlums, including from other states, to create a destructive spectacle and further their self-serving narrative about public service jobs and insecurity.”

“Thus, it is not sustainable to persist in spending 84 per cent to 96 per cent of its FAAC receipts on salaries and personnel costs as has been the experience of the state since October 2020.

“This government was not elected to devote most public funds to paying government workers and treat that as its defining governance mission, to the detriment of developing the state and its people.”

“The necessary verification of credentials for full implementation of this painful but necessary decision is still being done.

“It has not determined the total number of officers that might be affected by the decision. Neither has it stopped paying the minimum wage, despite the prompting of the denizens of sentiment who have urged it to suspend payment and thereby violate the national Minimum Wage Act.

“The Kaduna State Government prefers to take lawful and rational steps that are within its powers to rightsize its personnel and thereby reduce its wage bill.”

It stressed that it would not, therefore, succumb to the “veritable campaign of lies and misrepresentation” by the trade unions on the matter.

The state government claimed that it “has been assured by some trade unions that they will not be part of the planned sabotage of social and economic life.” He noted that the Trade Union Act prohibits strike action by labour workers who provides essential services.

“The law also forbids subjecting “any other person to any kind of constraint or restriction of his personal freedom in the course of persuasion” for strike action”, it added.

Bariatu reiterated that ban on public processions was still in force in the state, and vowed to protect state facilities as well as rights of workers.

“It is unlawful for anyone to try to deny them access or exit. Government offices are not the property of any trade unionist and none of them should entertain thoughts of locking up or vandalizing any facility.”

Also, he disclosed some of the state friendly policy that favours workers. “Kaduna is also one of the states that is most faithful in implementing the Contributory Pension Scheme, effective from 1st January 2017”.

“The state has also courageously attempted to settle the N14 billion it inherited as arrears of death benefit and gratuity from 2010, commencing payments with those who had exited service the longest.

“Since 2015, KDSG has paid over N13 billion in death benefits and gratuity.”

“This government has demonstrated in action, its commitment to the welfare of its workers, but it insists that this is sustainable only in the context of the general welfare of residents of the state that the government itself is mandated to serve” he added.

According to accounts, Kadafur is the first Deputy to be legislatively given the constitutional powers to act as Governor.

Since then, Umar Kadafur has been piloting the State affairs from security co-ordination, Sallah activities among others. 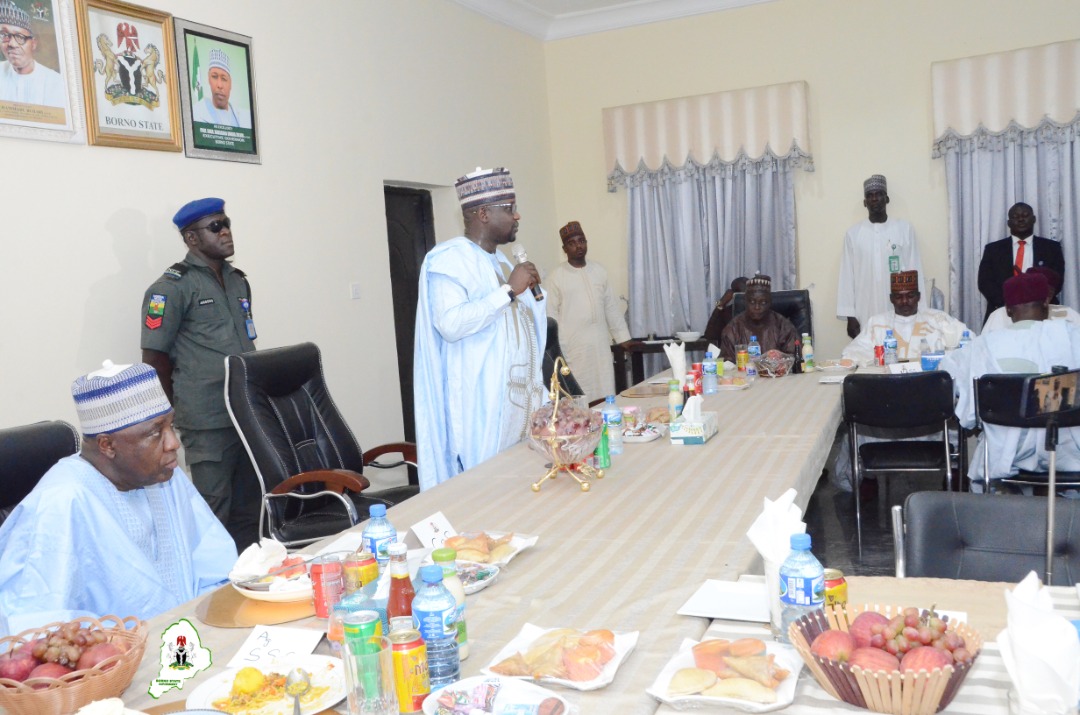 Unlike other parts of the northern Nigerian States, Borno is the epicenter of the Boko Haram insurgency for over a decade. With the rise in attacks around communities and villages, the acting Governor however perfectly coordinated security for peaceful and hitch free Sallah celebrations.

On the 13th of May 2021, Borno’s acting Governor, Umar Usman Kadafur led top Government officials and other Muslim faithful for a two Rak’at Eid prayer at Ramat square in Maiduguri.

The acting Governor after the prayers extended greetings to the people of Borno State while commending the security operatives for maintaining law and order, and for their sacrifices towards the fight against insurgency.

In the same day, the acting Governor as part of tradition received members of the State’s Executive Council and other Government officials for lunch at the Government House.

It is a usual tradition where monarchs pay visit to the sitting Governor to facilitate successful Sallah celebrations.
The acting Governor during the visit made assurances of improved security and welfare of the internally displaced persons (IDPs).

He was also at Biu between Thursday and Saturday attending to several Sallah activities.

The Management of Kaduna Electric has announced that the absence of electricity currently being experienced in the State is as a result of the industrial action embarked upon by the Nigerian Labour Congress (NLC).

According to a statement by Abdulazeez Abdullahi, the Company’s head of Corporate Communication, this is in compliance with the NLC directive, the Transmission Company of Nigeria, TCN has knocked off all our 33KV lines in Kaduna State.

The statement further appealed to all communities, security agencies and vigilante groups to be vigilant so that men of underworld will not cash in on the situation to vandalise power supply installations, adding that any suspicious movement around distribution sub-stations (transformers) should be reported to the relevant security agency.

“We have the collective responsibility to protect these critical national assets in our neighborhood. “We once again appeal to both parties in the dispute to strive at an amicable resolution for normalcy to return.” The statement further stated.