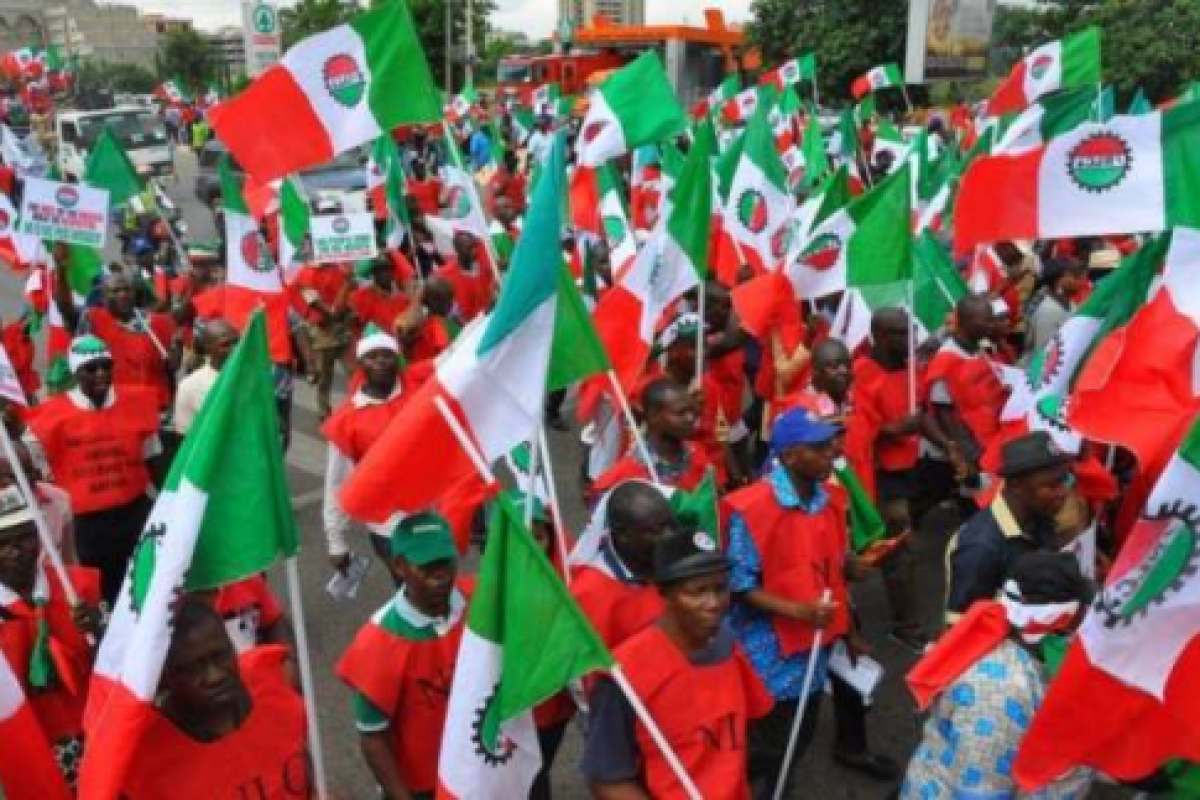 All governmental activities  are set to be grounded in Kaduna State as the Nigeria Labour Congress Kaduna State Council said it will embark on a warning strike for sacking of over four thousand workers in the state.

This was contained in a statement jointly signed by the Chairperson of the state Council, Comrade Ayuba Magaji Suleiman and the Secretary Comrade Christiana John Bawa which was made available to journalists in Kaduna.

According to the statement, the decision was resolved in an emergency meeting held with the delegation from the national headquarters of congress in Kaduna.

It says that the total withdrawal of services would commences this coming Sunday 16th May, 2021 by 12:00am (midnight).

It’s lamented that due process was not followed on the recent disengagement of over four thousand workers from the Local Government Service, SUBEB and Primary Health Care Agency by Kaduna State Government.

”The proposed withdrawal of services and the protest would be monitored by the National President’s and the General Secretaries of Nigeria Labour Congress of all the unions and the Global President, Comrade Ayuba Waba will be in Kaduna state to ensure the enforcement.

NLC directed that all civil servants in Kaduna state to remain at home for five days as a warning strike after which further directive will be given.

It will be recalled that Kaduna State Government sacked over thirty thousand workers in twenty sixteen and up to date their entitlements have not been settled.

No fewer than 40 Muslim worshippers were abducted by armed bandits while observing Tahajjud, a kind of midnight prayer observed during the Holy Month of Ramadan, at a mosque in Jibiya town of Katsina State.

Residents of the town told DAILY NIGERIAN that dozens of gunmen struck at the mosque around 2am on Monday and took away the worshippers.

“So far we established 40 people missing after the attack,” said a resident who preferred not to be named. Another resident who volunteered statement, Lawal Jibiya, said neighboring villagers alerted them about the impending attack, after sighting the movements of the bandits heading towards the town.

He said hundreds of youth and local vigilante group in the town were on alert and ready to confront the bandits, but the assailants changed their route and entered the town from the western entry point.

“We were expecting them from the eastern entry point through Daddara, Kukar Babangida or Magama but this time they proceeded beyond the town and camped at Jibawa.

“From Jibawa they then went round to the western entry point near Yunusa Dantauri Hospital and attacked a mosque on the outskirt of the town,” the witness said.

According to him, the bandits did not fire a single shot until they finished the operation.

Jibiya, a Nigeria-Niger border town, is one of the major targets of kidnapping and banditry activities.

General Overseer of the Living Faith Church International (Winners Chapel), Bishop David Oyedepo, says government should consult him for remedy for the COVID-19 pandemic, warning his church members not to submit themselves for the Coronavirus vaccine.

Oyedepo made the comment on Sunday during the 40th anniversary thanksgiving service of the church in the Ota Cathedral in Ogun State.

“They should come to me to find out how to deal with COVID-19 at no cost,” he said, warning his members not to take the “deadly thing” called vaccine.

“Let me warn you against this deadly thing circulated around the country, because it has not been duly tested. An elder of this church, who works with the World Health Organisation, confirmed this, thanking me for always speaking the truth about the authenticity of the COVID-19 vaccine,” he said.

The cleric decried visits by health officials to churches to vaccinate people, describing the action as an “insult” because, according to him, every church “is anti-COVID-19 zone.”

He said, “What an insult! What an assault! Nobody has the right to enforce vaccination on you, and anybody cannot terminate your employment because you refuse to take the vaccine, my God will show up (for you).

“Did I tell anyone I am sick? Don’t let anyone harass you into doing what you don’t want to do.”

Oyedepo also alleged that the side effects outweighed the benefits of taking the vaccine.

“They wanted Africa dead. I heard them say it. When we didn’t die as they proposed, they brought out this vaccination scheme. You need to hear their proclamation that Africa will lack spaces to bury corpses. But, today, reverse is the case. Africa has the least casualty among all the other continents of the world,” he said.

None of the members in the capacity-filled auditorium had a mask on or observed any COVID-19 procedure as Oyedepo said the foreigners who came for the anniversary had returned to their home countries in good health.

The cleric boasted that a shot of anointing oil would kill the COVID-19 virus.

The general overseer of Christ evangelical and live intervention fellowship  ministry, Pastor Yohanna Buru has donated a set of new clothes and wrappers to 100 poor Muslim widows and orphans to mark the sallah celebration.

While sharing the new sallah clothes  at Barnawa, Kawo and Rigasa communities in kaduna, Buru said the church has been doing this for many years,  and the aims is to support the poor muslim to celebrate sallah with joy and happiness and to also to strengthen Christians-muslims relationship.

The gifts were donated in collaboration with other Evangelists and other reverends.

According to Pastor Buru, the church deem it fit to support internally displaced persons (IDPs) and other refugees kids & widows that were chased- away in their communities due to series of attack by bandits,  kidnappers, and others that were affected as a result of  farmers-herders clash.

He said the church bought the new wrappers and sew  them to 50 -female orphans, and also new clothes  which was also shared to 50 boys that were orphans including childrens of the destitute.

The general overseer added that the church has shared over 50 bags of rice, millet and maize to the poor muslims in some kaduna communities and neighbouring states, that he  said will promote peace, love, togetherness, adding that it will strengthening better understanding among different faith based organization in Nigeria.

Buru mentioned that during Christmas and new year, some muslims has been helping the church orphans and widows by donation of bags of rice and other foodstuffs.

“The church cannot forget the annual contribution of a muslim woman (Hajiya Ramatu Tijjani). Ramatu has been doing beautiful things to all the widows and orphans in the church.

“We must remember that we are created by one God and we all are worshipping one God. We all have holy Books that were seen to all by one God.

“We must be our brothers keepers.”, Buru stated.

He, however, admonished both Muslims and Christians to join hands on promoting unity and live in harmony.

The cleric called on muslims all over the world to use the teachings during the 3o days of Ramadan, towards promoting peace and unity in Nigeria.

Responding, Mallam Garba Abdullahi, one of the muslim leaders in Barnawa  expressed delight over the donation by the church, stressing that seeing how church do usually help the poor muslims with many gifts items will promote unity among the two major religions in the country.

He testified that for over 5 years, Pastor Buru and the church has been assisting the poor muslims with food and clothes.

One of the orphans that received the new clothes, Maryam Mohammed, expressed happiness with the support from the church, saying no one remembered them, except for Pastor Yohanna Buru.

While praying for Almighty God to bless the church,  she called on Jama’atul Nasril Islam, Counsel of Islamic Matters and Council of Imams and ulamas to always remember the the poor muslim orphans and widows during the sallah celebrations.

Muhammed  also appealed with kaduna State Government to support the orphans and widows that were abandoned across the states, while calling on Federal Government to  create a center that would help in reducing the daily challenges they faces in terms of accessing food, education, health, among other needs.