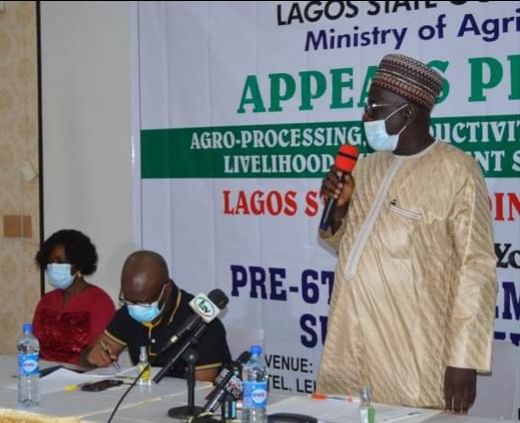 The National Coordinator of the APPEALS Project, Alhaji Mohammed Sani Jobdi has reaffirmed the commitment of the APPEALS Project towards boosting the agricultural productivity of small and medium-scale farmers and value addition along the priority value chains in the six participating states.

The National Project Coordinator made this known in Lagos State today during the opening ceremony of the ongoing Pre-Mission exercise to the state, ahead of the World Bank 6th Implementation Support Mission.

Jobdi said that the project has recorded significant achievements in Lagos State with the election and training of beneficiaries of the Women and Youth Empowerment Programme, the development of Business Investment Plans by beneficiaries and all other areas of the Project’s interventions.

‘’We flagged off the mission to take stock of what we have done, and to see if the Project is on track and see how we can forge ahead before the World Bank midterm review of the project,’’ he said.

Alhaji Sani Jobdi thanked and appreciated the Lagos State Government for the prompt payment of counterpart funds and for providing good leadership for the implementation the project in the state.

In her keynote address, the Lagos State Commissioner of Agriculture, Ms. Abisola Olusanya explained that stakeholders are satisfied with the level of the project’s interventions in the state.

Ms. Abisola who was represented by the Permanent Secretary Ministry of Agriculture, Dr. Oluyiwole Onusanya, said that so far, a total of 879 farmers, SMEs have been supported directly with physical inputs and equipment across poultry, rice, and aquaculture value chains while 3,516 stakeholders have benefitted indirectly.

Dr Onunsanya added that over eight thousand farmers had received training/ demonstrations with strong evidence of a positive effect on the Project Development Objective.

In her vote of thanks, the State Project Coordinator Mrs Oluranti Sagae-Oyiebo thanked the support of the state government, National Coordinating Office Abuja and the World Bank on the implementation of the project and pledged to do more toward the achievement of the project in the state.