The Academic Staff Union of Universities ( ASUU), has finally suspended its 9-month strike.

The union announced the suspension of the 9-month old industrial action at a press conference held Wednesday morning in Abuja.

ASUU President, Professor Biodun Ogunyemi, who led other National Executive Committee of the union to the event where he made the announcement, explained that the suspension takes effect from today, Wednesday 23, 2020. 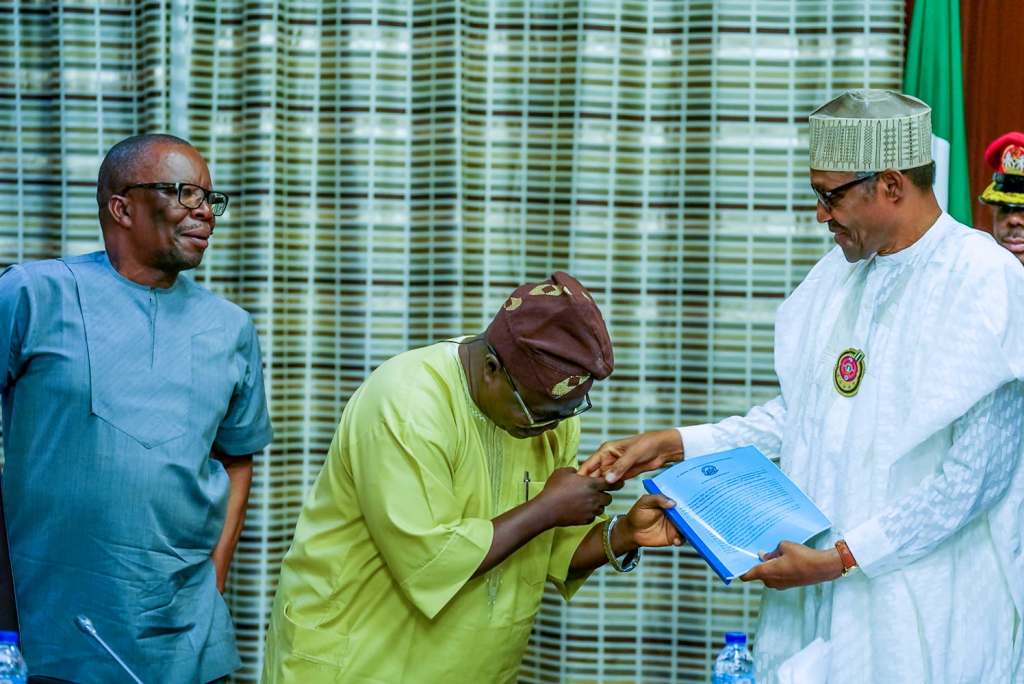 The decision to suspend the action, according to Ogunyemi, followed the resolution to that effect by NEC at its meeting held earlier.

It would be recalled that ASUU embarked on the strike since March 2020, due to IPPIS payment roll and other related issues rocking the Nigerian Universities system.

Senior Special Assistant, Media and Publicity to the President, Mallam Garba Shehu, said yesterday that there was need to stop herdsmen from roaming all over the country to prevent clashes with farmers.

Shehu spoke when he featured on Sunrise Daily, a Channels Television programme.

The presidential spokesman was responding to the allegation that President Muhammadu Buhari was grabbing lands to dole out to herdsmen.

The allegation was made by a member of the Peoples Democratic Party, PDP, Katch Ononuju, who also featured on the programme.

Ononuju had said the government did not care about the lives of its citizens, hence, the continued kidnappings, killings and clashes between farmers and herders.

But Shehu blamed the actions of the herdsmen on the drying of grazing lands in the north.

He said: “This country has a grazing problem because the herders are mostly Fulani. The challenge is from these places they had practiced, you know, the encroachment by desert leading to drying up of a lot of grazing lands in the northern-most parts of the country.

“This has put pressure on the herders who have been looking to the south-west green grass so that their cattle will eat and also have water to drink. It is a global climate situation which is unfortunate considering what has happened along the Lake Chad basin.

“I’m glad that governors of the north are coming together to say let us resolve this problem of grazing because we have to stop these herders from roaming and eating up our crops all over the country.

“They drive their cattle into farmlands and eat up the crops. The farmers fight back and the killings follow. The country cannot continue in this way.

“The president has no plan to fish for a land other than the one he has inherited from.

Popoola, who spoke to NAN in Lagos, added that construction works had reached the stage for casting concrete on additional three expansion joints.

He said: “There is going to be total closure of Third Mainland Bridge to allow for the casting of three number expansion joints on the Island Bound lane.

“The effective date of the closure will be from 12 midnight of December 25. So people will be allowed to use the Third Mainland Bridge to celebrate Christmas.

“By the time the Christmas is winding down, which is 12 midnight, we are going to close it so that we will be able to cast the concrete on Saturday, the 26th and 27th we cast again.

“And we need about 72 hours for this concrete to set. Therefore, the opening will be on December 27 midnight, that is 72-hour closure.

“This is to prevent vibration of the bridge. If we allow vehicles to be moving on one lane, there is going to be vibrations and the concrete will not set properly.”

The controller said that all the alternative routes were in good condition and traffic regulatory agencies had been deployed to effectively divert and manage traffic to avert gridlock.

He appealed to road users to cooperate with traffic regulatory agencies.

Popoola also announced a 48-hour partial closure of the Lagos-Ibadan expressway from December 28 to 29 to complete some work on a fly over bridge on the project.

“The contractor, Messers Julius Berger, wants to install cross beams at Kilometre 16, that is, around MFM,” he said.

He explained that the Piers were already standing on both sides of the road and the contractor was to lay the cross beam on top across the road.

He said: “That area will be cordoned off, there will be closure within that section from noon on December 28 and it will be opened to traffic by 5 am the following day.

“The 200 metres to get to that particular location, we have diversion and another diversion 200 metres away from that place.

“One lane will be opened to traffic, it is only one lane we are closing to traffic at a time. The first lane that we are going to close is outward Lagos, that is the Ibadan bound carriageway, we will close it on the 28th.”

“ And then the second day which is 29th, we are moving to the other lane which in inward Lagos. The same 12pm to 5am,” Popoola said.

He appealed for patience and understanding of road users saying that the construction was part of the progress that the Federal Government had achieved on the project.

“We regret all the inconvenience and hardship this might have created,” he said.

He said that all the construction zones had been cleared and the highway had been opened to traffic which was responsible to seamless movement on the road.

The Third Mainland Bridge in Lagos, which was going through series of repairs, had to be partially shut on July 24, for another round of rehabilitation works.

The repair expected to last six months was extended by one month due to the recent #EndSARS protests in Lagos extending the completion date from January 2021 to February.

The construction was initially divided into two phases of three months on each carriageway, starting with the Oworonsoki bound carriageway whose completion dragged to four months.

Traffic was partially diverted on a stretch of 3.5km where construction is ongoing between Adeniji Adeniji Ramp and Ebute Meta, while different time belts were allotted for traffic diversions on the bridge.

The 11.8km bridge is the longest of the three bridges connecting Lagos Island to the Mainland.

The bridge starts from Oworonshoki, which is linked to the Apapa-Oshodi Expressway and the Lagos-Ibadan Expressway and ends at the Adeniji Adele Interchange on Lagos Island.

Constructed in 1990, the bridge was adjudged as the longest in Africa until 1996 when the Oct. 6 Bridge in Cairo, Egypt was completed.

The reconstruction/rehabilitation of the Lagos-Ibadan Expressway on the other hand was flagged off in 2013 by former President Goodluck Jonathan and was awarded to two firms.