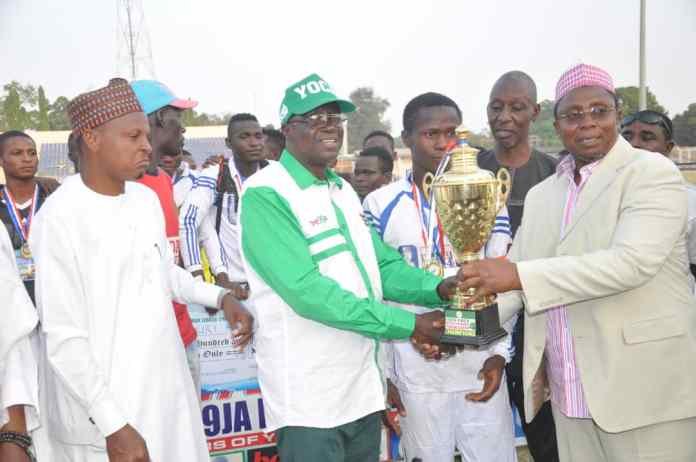 Ikhana Babes placed second position and smiled to the banks with a N100,000, while Gamji Babes finished third position and got N50,000.

Gunners FC settled for the fourth position, and received N30,000 for their efforts.

He added that, if given the mandate to rule the state in 2019, issues of youth development and empowerment will will be accorded top priority.

Represented by a former Commissioner of Youth and Sports, Honourable Shehu Adamu, he said that he would have been physically present, but had to attend the flag off of the PDP Presidential campaign rally in Sokoto which is also taking place on Sunday.

In an interview with newsmen, KSCD YOCA CEO, Coach Nasiru Adamu Chiji he was happy about the success of the Super Four.

“I am very happy to gather this kind of people here this is not the first or second edition, we have been doing it to assist the youth and take them away from drugs and other vices.

On the sponsorship from Naijabet and others, he said that it is a good thing they have sponsors coming in to sponsor football.

“It us a good decision because it will take the youth off streets,” Chiji added.

Several dignitaries, including the Kaduna State FA Chairman, Honourable Sheriff Alkassim were present at the event. 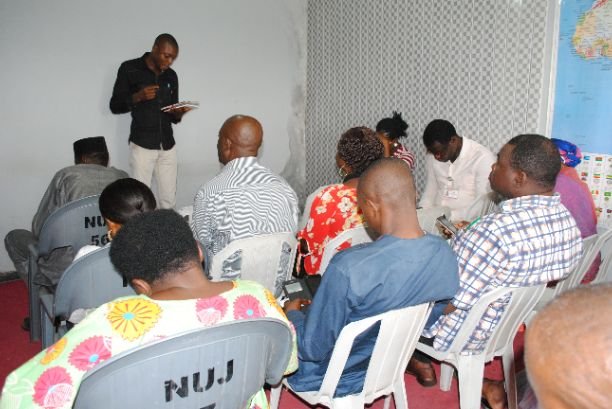 Mrs. Dadik, explained that, “MediaAfrica’ Conference, a project of AMDF, is a platform for discourse to bring to the fore development issues affecting Nigeria and Africa at large and the place of media in addressing such.

“AMDF believes that no development programme and project can succeed without the active engagement of Media. This is because the media has the ability to influence and cause change in individual’s behaviour and lifestyle, as well as mobilizing communities for positive action.

“Participants of the conference include Journalists, Government officials, Development workers, NGOs, Civil Society Activists and Students among others, who are expected to also promote a working relationship between the Media and other stakeholders towards harnessing Africa’s demographic dividend.”

The 2018 Conference themed ‘Africa’s Raising Population: Media as a tool for Harnessing Demographic Dividend’ is set to take place on the 11th of December 2018, from 9am, at I-Care Women and Youth Initiative Conference Hall, No 6 Suleiman Crescent, off Alkali Road, Kaduna.

99 athletes are participating in the 3rd edition of the “One Service One Medal” (OSOM) Games taking place in Kaduna.

He said that OSOM was introduced by the ministry to hunt for talents because the military and para military have been a source of podium success in the past for the country.

“That was why the ministry sought synergy to tap into available talents from the service personnel,” he said.

He explained that in spite of challenges, they have been able to continue hosting the games.

“We have been having challenges, but with our zeal, we are ensuring the games does not die, the economic situation not withstanding,” he added.

Dr. Are explained that they will be doing seven sports, including the traditional tug of war, football, athletics, karate, shooting, table tennis and tennis.
all will be medals winning.

“Karate has commenced this morning and has been concluded,” he added.

Responding to questions, he said that they have medical people on ground and what happened at the karate was a fracture of the finger and there was nothing they could do but first aid, after which the athlete was taken to Barau Dikko Specialist Hospital.

On the absence of some services from the games, he said that they made their position known earlier, blaming the security challenges bedeviling the country.

“The security of the nation is important and the personnel are over stretched so some apologized for not being able to participate as a result of being over stretched in security operations across the country,” he said.

On the impact of the games from the first two editions, he said that some athletes have been discovered.

“We have been discovering athletes and some of them have represented us internationally,” he stressed.

Speaking further, he said that Nigeria cannot win medals if it doesn’t have a stream of athletes to take over from the present crop.

“To prepare an athlete, you will require a minimum of N20m. What we are spending on athletes is still peanuts. You can’t use four years in training an athlete for Olympics,” he noted.

The Director Grassroots Sports Development decried the practice in Africa whereby sports development is left solely to the government.

“We are Nigerians and sports not only in Nigeria, but Africa is solely sponsored by the government, which is really unfortunate,” he lamented.

Reacting to the long absence of the National Sports Festival (NSF), he said that it was the host state that could not complete its venues.

“One of the objectives of NSF is to give states opportunity to develop facility. It took long because the state supposed to host kept shifting the goal post. We had to shift it to Abuja I can assure you, the festival would hold” he assured.

Responding to the issue of civilians represents some of the military or para military outfits, he dismissed it as a non issue.

“Once you belong to a service, you are eligible to take part. You don’t have to be a uniform wearing. Most of these services use sports to recruit. If there is any,” he pointed out.

He appreciated the efforts of the media in coverage of activities not the ministry.

Dr. Are said, “The sports ministry and the media must work together. We want to appreciate members of the media we want to say a big thank you to you and we hope the relationship will continue

While extending condolences to the Assistant Secretary Sports Writers Association of Nigeria (SWAN), Kaduna State, he said, “We want to use this opportunity from the ministry to sympathise with Mr. Jacob Onjewu Dickson, the Online Editor of New Nigerian who lost his mother, on behalf of our Minister, we express our condolences,” he said.

The family of Mrs. Cecilia Onyinje Dickson, the mother of the Online Editor of New Nigerian, Jacob Onjewu Dickson, who passed on November 16, 2018, have announced burial arrangements for the deceased.

A statement signed by Jacob Onjewu Dickson on behalf of the family, said that the Wake Keep would be held at the family’s residence in Otukpo GRA on December 20, 2018. 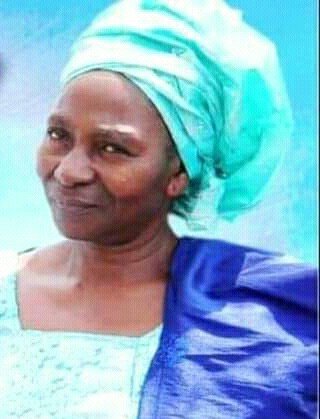 “After the service, the remains of our mother will be conveyed to Pa Okala’s Compound, Atilo Village in Oglewu, Ohimini Local Government Area for Interment,” it informed.

The statement informed that she is survived by eight children, two step children, brothers and sisters, aunties and uncles, a son-inlaw, four daughters in-law and 15 grand children.

Late Mrs. Dickson passed on eight years after the demise of her husband, Chief Abodu Dickson (Oyame K’Agboke). All her life, she was a full time house wife, in spite of her training as a professional teacher.

“She was a devout Christian, who spent most part of her life time serving God and humanity. She died in active service, while leading a prayer session on her knees at a Methodist Church function in Igumale, Benue State.

“She would fondly be remembered for her gentle spirit and as a peacemaker who never quarreled with, or bore grudges against anyone,” may her soul rest in peace,” it concluded. 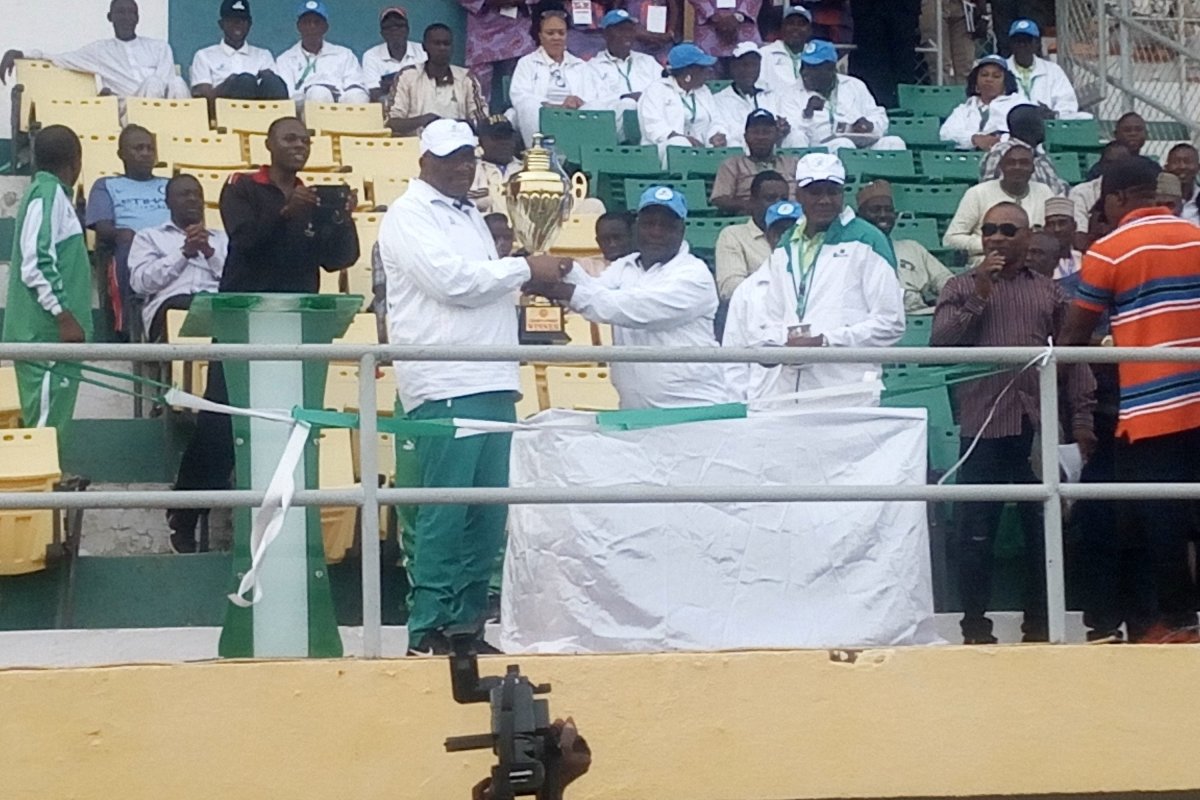 The Minister of Interior, Lt. General Abdulrahman Dambazzau, has warned personnel of security agencies under the ministry to desist from unruly act and indiscipline unexpected in the paramilitary service.

Gen. Dambazzau, who gave the warning in Kaduna on Saturday, at the closing ceremony of the Ministry’s games, noted that drastic measures will be taken against any officer caught in such act in the subsequent edition of the games.

“The objectives of the Games were mostly achieved except for the pockets of reports of poor spirit of sportsmanship recorded in some venues, which does not portray the discipline that is expected in paramilitary service.

“I want to admonish athletes and officials that did not conduct themselves maturely and responsibly to desist from such acts because in the next edition, drastic measures will be taken against perpetrators.” He said.

The Minister, also donated all the equipments used in the games to two primary schools and two secondary around the Ahmadu Bello Stadium and Murtala Mohammed Square, where the event took place.

According to him, “as part of corporate social responsibility and charity, l
hereby direct the Main Organizing Committee to donate the competition
equipment and balls to two primary and two secondary schools located
around the environs of the Ahmadu Bello Stadium and Murtala Mohammed
Square.”

In his account of the 2018 MIGA Games, Dambazzau, said, “the technical account of the games is as follows: Post-accreditation entries show that 940 athletes competed in 91 events across 13 sports with a total of 90 Gold, 90 Silver and 116 Bronze medals won across the six participating services.”

He announced the Nigeria Security and Civil Defence Corps as the overall winner of the games with a total of 96 medals; 50 Gold, 24 Silver, and 22 Bronze, while Nigeria Police Force, came second with 87 medals; 31 Gold, 32 Silver and 24 Bronze.

The third place went to Nigeria Prison Service with 41 medals; 2 Gold, 13 Silver and 37 Bronze, while Federal Fire Service, got 2 Gold, 4 Silver and 14 Bronze, 20 medals in total. The Nigeria Immigration Service, no Gold, 12 Silver and 25 Bronze, 37 in total. The Interior Ministry was last with only 2 Bronze.

The commended the organizing committee, saying, “the overall technical performance of the Services including
the Ministry of Interior Sports Club showed a keenly contested competition
and a greater window for future development and turnover of medals.

“It is indeed heartwarming to announce unequivocally that the Ministry of
Interior Games has become a brand and a major item on the biennial
calendar of sports in Nigeria.

“I must at this material point in time express my sincere gratitude and that of the Ministry to all Service Chiefs in the
paramilitary and the people and government of Kaduna State for their
maximum cooperation and support for which without such, the successes
recorded in the 2nd edition would have been impossible.”